We arrived Cebu at four o'clock in the afternoon yesterday. It was a very pleasant, sunny, but a little bit windy day. Boarded in the Super Cat boat, the sea was calm and pretty when left the port of Ormoc. But when we were in the channel (between the islands of Camotes and Cebu), we experienced roughness in waves (white caps). Two girls were screaming when the boat shook left and right. Ugh, that was scary. I almost had a motion sickness that moment.

Thanks God we arrived Cebu safely. Super Cat is the fastest boat that sails from Ormoc to Cebu and vice versa.

It is hard to leave but we have to. We are leaving Leyte and will head to Cebu tomorrow. We will fly back to Texas on the 31st. The three weeks vacation in the Philippines is truly a happiness for us. Nothing compares to the good times spent with the family. We will miss everyone...surely. Not even on the plane yet, we are feeling the blues now. I know that everyone had a great time...they are happy to see us too.

As soon as we get back to work in the USA and get our pay checks, we will start saving again for the next trip :) We are looking forward to another vacation...hopefully a month long vacation.

Strolling And Shopping In China Town

Two weeks had passed and the fun is still on going. Since we arrived home, the schedule has been hectic for days. The first week of our vacation was spent visiting relatives and friends in Manila. There were lots of activity in the middle of the unpredictable weather.

We went to Binondo (China Town in the heart of Manila). My honey loved shopping in the area. Despite of power failure on the other side of the street, still, we strolled store to store along Ongpin Street :) We bought a couple of Chinese calendar and a lucky bracelet for me.

Then we rode a jeepney on our way back to the hotel. My honey enjoyed it. Me too. It's what I missed. The busy roads and people...also the vehicle honks :)

Quality Time On A Vacation

Lazy on a vacation...

...that is what we are feeling right now.
We love going having a vacation.
Fun and enjoyment are a big show.

Seeing the family again means so much.
Spending time with them eating a big pack of lunch
brings quality time a bunch.

But the best moment of fun is the memories
shared and made with loved ones you missed
while you are away for years.

Something Is Not Right

It is verified that the prices are doubled now. I myself can attest that almost everything in the Philippines including groceries, personal necessities, body essentials, and other things, even the meals in the food chains have increased their prices. I do not understand. They said because of the successive calamities encountered by our country. The price of oil has dropped but still, all of these commodities sky rocketed their prices.

Something is not right.

Wrong timing. Yes it is. My monthly visitor came very early this month. And it is our vacation time. Good thing I had no cramps...very considerate...knowing that I am on a vacation :) Swimming in the pool is my concern. But the schedule for the trip to the resort is on the 16th, so I am safe to soak in the water next week. Yay!

Email ThisBlogThis!Share to TwitterShare to FacebookShare to Pinterest
Labels: being a woman, personal, vacation, women's interest

Nowadays, we are getting more watchful of our health status. Because of different types of sickness arising, we do our best to keep our families from getting them.
In monitoring our health, the first thing we observe is our weight. Losing or gaining weight depends on a person's perspective. We need to lose weight to maintain good health, same as gaining weight. But being overweight is different. It may become the reason of getting a heart disease. We do not want to be sick, right?

In order to maintain a balanced weight, some people rely on supplements like Herbalife. I heard about this before and even told of good feedback. Since then, it has been the talk of the town. Herbalife Gewichtskontrolle supplies them for weight management supplement purposes. If you are interested to know more about this product, feel free to visit, read, and understand everything. So you will not be misguided.

Bob went over to his friend Joe's house and was amazed at how well Joe treated his wife. He often told her how attractive she was, complimented her on her cooking and showered her with hugs and kisses.

"Gee," Bob remarked later, "you really make a big fuss over your wife".

"I started to appreciate her more about six months ago," Joe said. "It has revived our marriage and we couldn't be happier."

Inspired, Bob hurried home, hugged his wife and told her how much he loved her and said he wanted to hear all about her day. But she burst into tears. "Honey," Bob said, "whats' the matter?".

"This has been the worst day," she replied. "This morning Billy fell off his bike and broke his ankle, then the washing machine broke. Now to top it off, you come home drunk !".

In times of difficulty, we need assistance. We may get this from our family or trusted and reliable friends. Sometimes, if we see that they are also in a tight situation, other options come in to mind. Financial crisis is unavoidable especially if you are the only one who has a full time job that helps provide for your family.

I have been to that situation. And it is very difficult because the overall budget is always a concern at home. There was a time when I was in a serious need for money. That was when my job contract has ended. My sibling was in college that time. I was the only one who was supporting for his expenses and everything. When my job ended, my sibling started to worry. It bothered me too because there will not be a source of income for me. I did not want my sibling to skip a semester. So I thought of getting a quick cash loan. The process was not very tight because of my good credit record. I looked for a new job. Luck was nice to me for I was hired as full time employee in the city a week after the day the job contract ended. Then I was able to pay my loan in affordable payment terms until it was all paid off.

It was a very tough situation for me but I managed to think of something that can help me financially for a short period of time. My family relies on me. And they are the priority no matter what.

A Birthday Gift From His Favorite Gift Wrapper 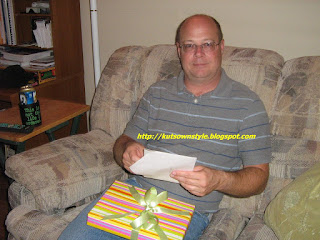 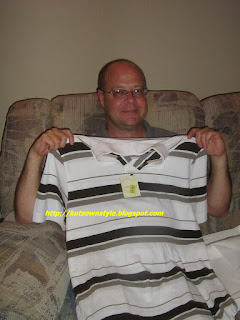 A gift to my honey's birthday. Wrapped in a multicolored gift wrapping paper is a Roundtree and York knit shirt. He loves shirts with collars but he is picky when it comes to the fabric. This one is made from organic cotton. Though he does not like the sound of it, he likes the shirt :)

I chose to wrap the gift in a multicolored paper because it looks pretty and cute. I wanted him to smile when gets his present. And he did. He loves it, of course. I am his favorite gift wrapper :)

Happy Birthday Hon! The message in the card truly expresses my thoughts for you and for us.

This is the second day of driving alone going to and from work. Oh hey! By the way, I passed the driver's license test Monday morning at 8:00. I feel so grateful because the examiner approved me for license. I love her :)

I did the parallel parking real good though my car was kind of close to the front pole, the space is still safe. The road test took about 10-15 minutes. Focused on following her instructions, left turns were mostly done. My rating for observation, control, and position on signals, signs, and maneuvers are Good. I did my best. But on speed limit, I need to work on that.

Anyway, the challenge was successfully finished. I have my temporary license and I can drive by myself legally now. Another accomplishment has been achieved.

To Ms. Meadows (driving instructor) and my honey, thank you so much for your patience.

And to my family and friends (bloggers and non-bloggers), I appreciate your encouragement and advice.