Lazy Day After The Trip

When I work so hard for long hours or being on a trip for a day or two, tiredness doesn't get to me much on the same day.  It will kick in the next day that will make me feel so lazy and tired.  And that's what I felt the other day.

We went on a trip to Oklahoma Sunday to visit and to have a family adventure in Beaver's Bend Park.  We went to the lake and had quality time just me, dear husband, and darling daughter.  It was a very pleasant day.  There was a forecast of severe thunderstorm and tornado warnings in some cities of Oklahoma but not in Broken Bow.  I thought we won't be able to stroll around the park the next day which is Monday.

It was only a two day adventure but I was tired and worn out.  My dear husband let me drive to and from.  We got back home Monday evening and we didn't do anything after dinner.  We're all tired and slept early.  Tuesday was a lazy day for me.  I did nothing but eat and watch television.

Weekend Snapshot: All Girls Photo With The Bluebonnets

Me, my cousin, and a friend of ours together with the kids went to town to have some pictorial in the Bluebonnet patch. It was an immediate plan and we didn't know if our friend would be available to join us today.  But we were glad that they made it.

It's clear and beautiful day but a little breezy.  We had fun taking pictures.  The girls love being outdoors and they're running and exploring.

Bluebonnet is the State Flower of Texas.

Outdoor Fun: The Benefits of an Outdoor Fireplace

Many people enjoy cozying up beneath the comforting flames of an indoor fireplace. However, an outdoor fireplace may prove to be even more rewarding. Not only will a beautiful fireplace enhance the curb appeal of the property, but it may also become the family’s favorite gathering area. Here are some of the key benefits of constructing an outdoor fireplace.

Entertainment Purposes
In order for a party or cookout to be remembered for years to come, the guests need to be entertained. An outdoor fireplace will definitely be adored by every partygoer. After then sun begins to set, the glowing flames of the outdoor fireplace will become the main attraction. Everyone will be able to kick back and enjoy themselves for the rest of the evening.

Cooking
If the fireplace is outfitted with a fire grate, it can be used to cook a variety of delicious foods. While some people may enjoy roasting marshmallows, there are others who may prefer to cook their meats and vegetables over an open flame. Some fireplaces are designed with grills, which makes the task of hosting a cookout even easier.

Warmth
The warmth provided by an outdoor fireplace is especially beneficial during the cooler months of the year. The extra heat helps to make the cool temperatures a lot more comfortable. However, many people will also appreciate the warmth of an outdoor fireplace in the summer. Friends can sit around and tell ghost stories until the wee hours of the night.
Ambiance
Like a waterfall, a fireplace is able to provide instant relaxation. Many people love to gaze at the sky while the flames quietly flicker in the background. An outdoor fireplace is a great place for a person to come when they need to relieve some stress or explore their imagination. As most people know, a fireplace will certainly help to set the mood for a romantic night at home.

Adds Value to the Property
Some homeowners eventually get the urge to sell their beloved house. Unlike some of the other home additions, a fireplace actually enhances the value of the property. Prospective buyers will view the outdoor fireplace as a very useful asset. Most professional outdoor fireplaces are designed to last for decades, so the future homeowners will not have to worry about replacing it anytime in the near future.
9 comments:

Happy Easter To One And All!

It's a beautiful Easter Sunday.  The weather is pleasant and the temperature is just right for the Easter Egg Hunt and pictorials.  We attended the worship service at the Community Church in Tyler.  It was a great service and a strong sermon.  I got emotional for a moment when we were singing songs.  I was touched. After that, we head home and some lunch.  Then took family portraits.

How about you?  By the way, Happy Easter!

There's A Snake In The Garage!

'Freaked out today!  We were about to go grocery shopping and head out to my cousin's house after for kids play time when my darling daughter and I saw a snake in our garage.  It fell down from the garage door while it was opening.  I thought it was the manual that had dropped from the door but when I looked down under my car, that thing was slowly moving.  I screamed and told my daughter it's a snake.  Immediately I told her to go around the tractor.  She did and I picked her up quickly and put her on the chair in the corner away from my car.  The snake was slithering slowly towards the tool box and gardening tools.  When he was still behind the back tire (at the right), I thought getting in my car and ran over it.  But I couldn't find my keys!

My daughter was scared that she didn't say anything after I screamed and told her it was a snake.  She was just standing on the chair quietly looking at me.  Finally I found my keys which is sitting on the chair where DD was.  When I looked under my car the snake's gone and I am pretty sure it's under the tool shelf that moment.

I called my dear husband and told him about the encounter.  He asked me about the size of the creature.  I said it's like 2 feet long and like a 1/2 inch round.  Kind of dark brown and shade of orange color.  I didn't quite observed the pattern on it.  As per his suggestion, I pulled all the boxes full of garage sale items located by the wall close to the door of the house and dragged them to the center of the garage because the snake might slither towards them.  He told me to make some noise to scare the animal away.   I did it for like five minutes but the snake didn't come out. So my husband told me to go do what I got to do and he'll take care of it when he gets home. On our way to the grocery store I asked my daughter what's the color of the snake.  She said brown and orange.

As soon as he got home, my husband tried to find the snake in the garage.  When he browsed the garage door he saw the creature coiled itself around a metal bar.  My husband poked the snaked trying to get it off there.  When it didn't, he opened the garage door and there it fell down already hurt almost cut in half due to being stuck between the metal bar and the bearings.  Then my husband got rid of it successfully.  He applied snake repellent outside and inside the garage.  He bought it on his way home.

That was the third time I saw a snake.  I don't want to see one anymore!

Wordless Thursday: Tulips For Me On 6th Wedding Anniversary 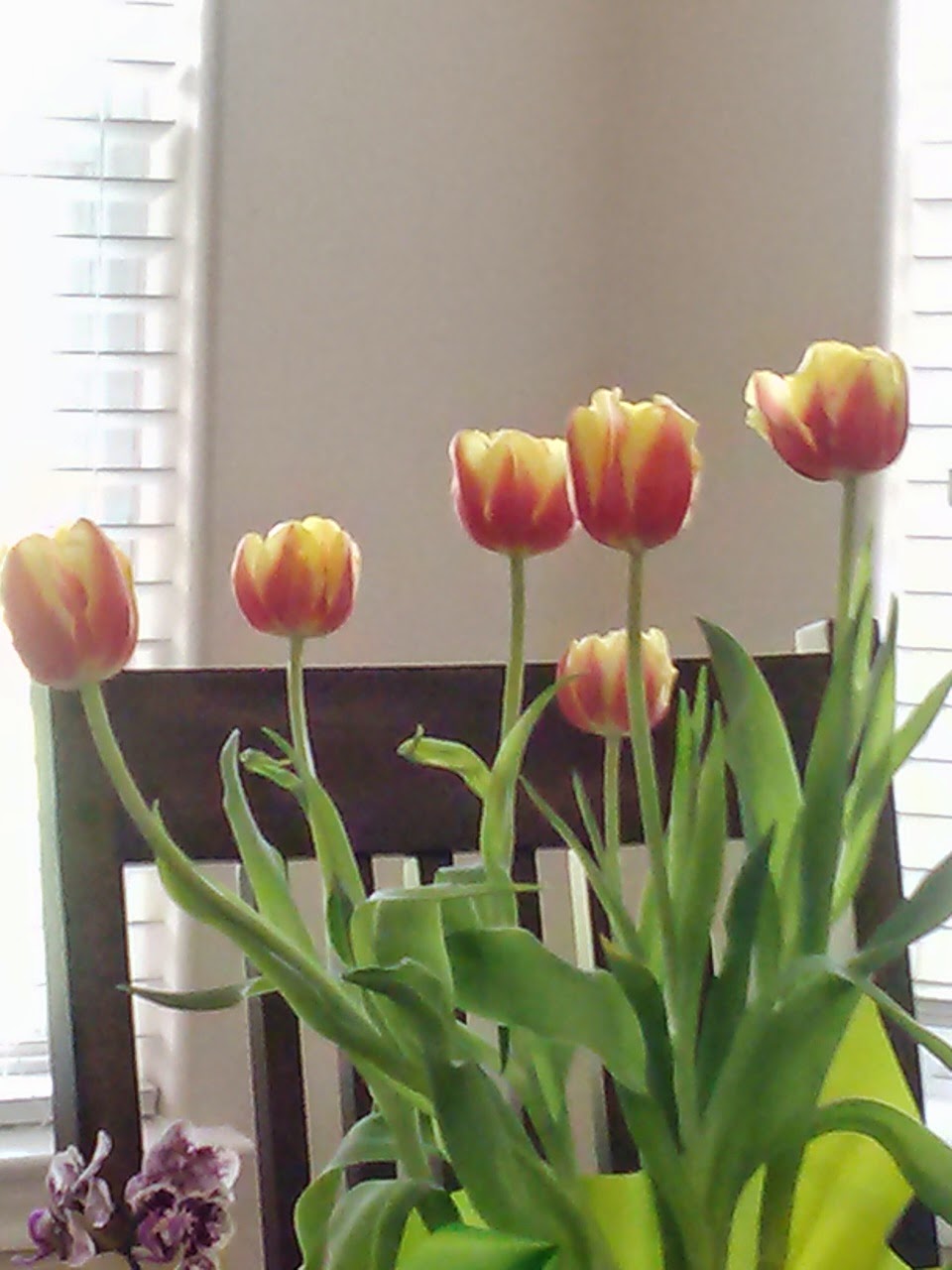 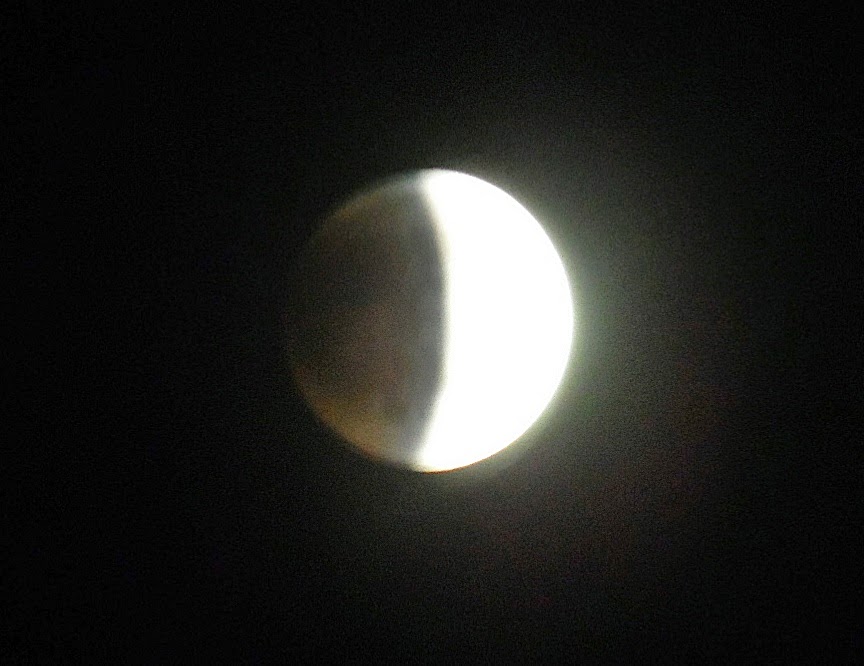 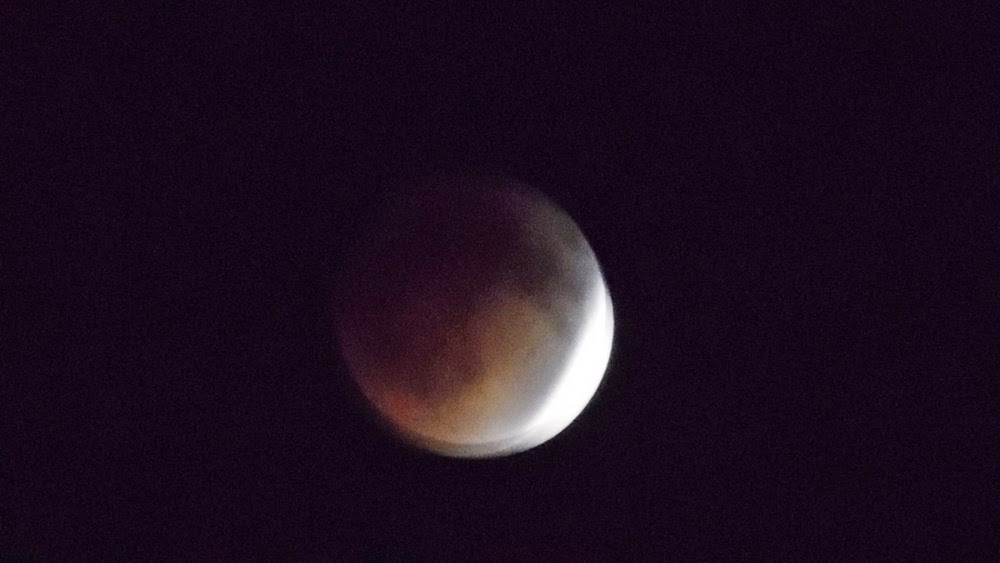 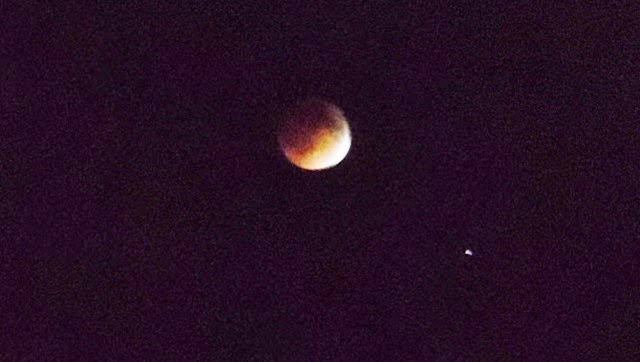 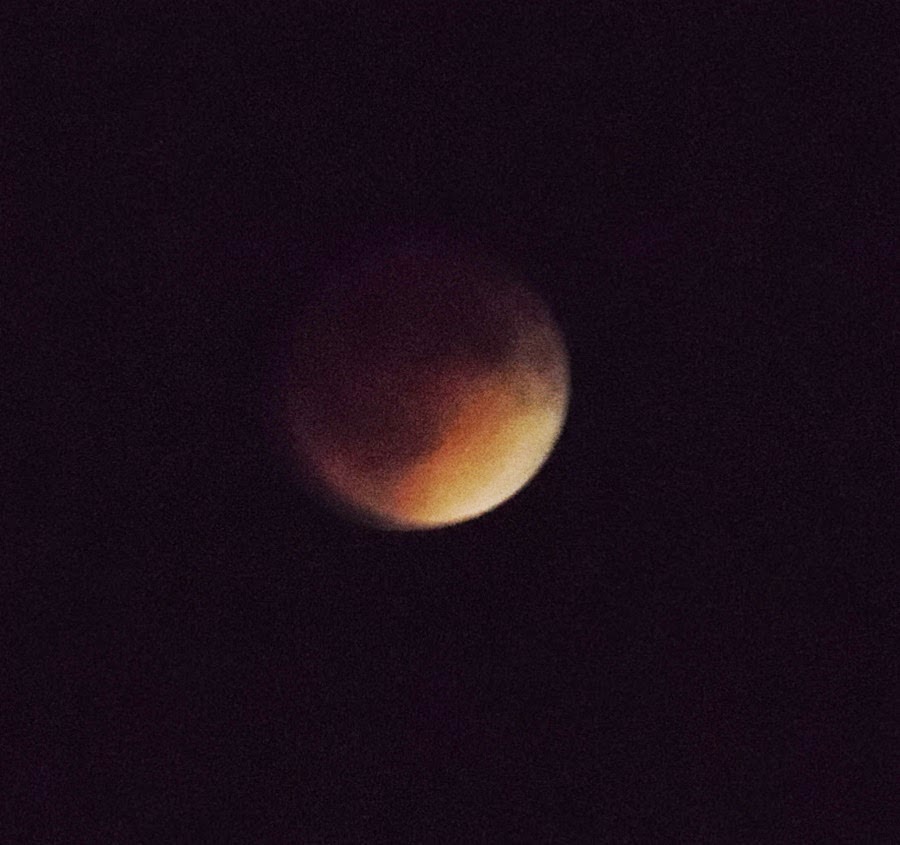 I didn't know that a lunar eclipse was about to happen until I saw a friend's shared article about the Blood Moon on Facebook.

The temperature dropped to about 42 degrees Fahrenheit and I was shivering outside trying to take great photos of the eclipse.  I thought, to keep myself warm, I will go inside my dear husband's truck.  Well I realized that it was not a good idea because I will be in trouble for using the gas for heat.  So I went in and out of the house.

But I tried my best to capture pictures of the beautiful moon.  I didn't want to miss the wonderful phenomenon.  Thanks also to the live stream of the lunar eclipse courtesy of the Griffith Observatory located in California.

There will be upcoming lunar eclipses.  For details click here.

Weekend Snapshots: Spring In The Yard

These pretty little blooms are from the weeds in the yard.   My dear husband called me and darling daughter to show these flowers before he mows them.  I told him not to mow the purple ones shown on the left.  They're located by the bushes which faces the road.  The white weed flowers and the single blue flower shown on the right are scattered everywhere so he has to mow them.

Although these are weed flowers, they look really pretty and colorful.


My darling daughter and I went to an Egg Hunt at the park yesterday with my cousin and her daughter.  On our way home, I was feeling a little hungry.  My little was eating her snacks and there was still some in our lunch bag but I didn't care for a sandwich.  I thought of donuts.

I remember when my dear husband and I used to buy groceries at Albertsons.  I always buy donuts there.  So I called him and asked if he can stop by at Albertsons and grab a couple donuts while waiting for the prescriptions' refill.

When he got home last night, he brought home four donuts - two for the little one and two for me.  Ah, I love donuts.  And yes, I deserve one.  :)  And so are you. 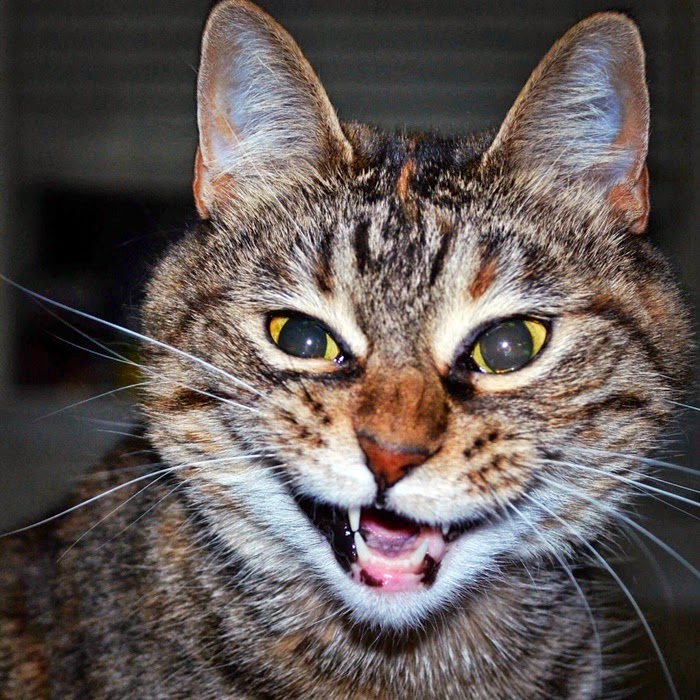 This evening's weather was very scary.  See how the sky looked like? It was taken on my way home from a grocery store this evening.

I was in the store buying some ingredients for my green salad for tomorrow's lunch when my friend called and told me that a tornado warning is up at our area and a tornado just passed her town and heading town close to ours.  I was aware that there's a severe thunderstorm coming but not this tornado thing.

When I finished checking out and headed to my car, the wind was blowing like crazy and sky was so dark.  It was close to 7:30 P.M.  In the Spring and Summer, the sun sets at 9:30 P.M. the latest.  As soon as my friend hung up, I called my husband and my cousin to tell about it.

The severe weather brought hail and the tornado made two touchdowns but not in our area.  We only had rain at 10:20 P.M.  Thanks God!